David Adams is the Concertmaster of the Orchestra of Welsh National Opera, co-Artistic Director of the Penarth Chamber Music Festival and teaches at RWCMD.

In his role at WNO, he performs concertos with the orchestra and directs concerts from the violin. He has appeared as guest leader with most of the major orchestras in the UK most recently English National Opera, Royal Opera House and the Halle Orchestra.

Equally at home on violin and viola David has made guest appearances, recordings and broadcasts with the Nash Ensemble, Endellion String Quartet, Gould Piano Trio and Hebrides Ensemble including recording the Brahms Piano Quartets (Gould Piano Trio) and the Beethoven String Quintets (Endellion String Quartet). Previously a member of the London Bridge Trio and the Raphael Ensemble, his recordings of Schumann and Mendelssohn Piano Trios were received with critical acclaim and the London Bridge Trio’s live broadcast of Fanny Mendelssohn’s Piano Trio was selected to be the cover disc of BBC music magazine.

This year David will appear at the Winchester and Wye Valley chamber music festivals, and has directed a winter tour of concerts with WNO. He was honoured to be invited to participate in the IMS Prussia Cove 50th anniversary celebrations at the Wigmore Hall in 2022.

David belongs to a musical family – his father, John Adams, was Principal Viola of the Halle Orchestra and his wife is cellist Alice Neary.

Lucy is best known as the violinist and founder member of the Gould Piano Trio, one of the UK’s most respected ensembles. 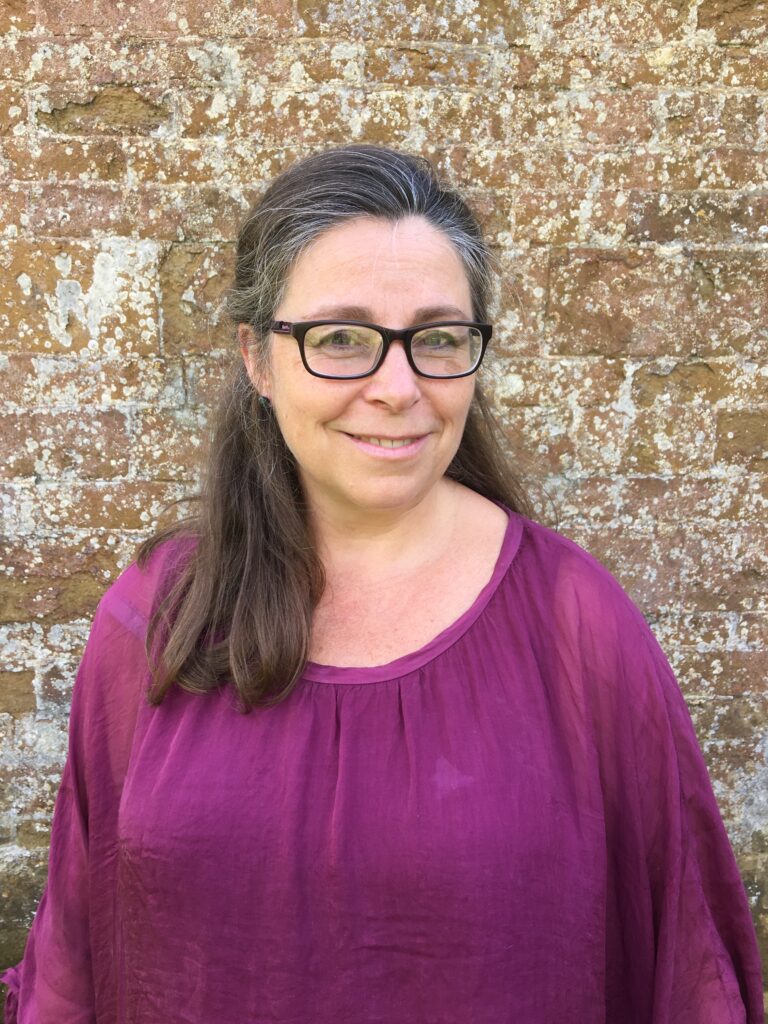 Several international awards, a busy schedule and an impressive discography are testament to Lucy’s dedication to this genre since embarking on her career.

Lucy studied at the Royal Academy of Music, London and Indiana University, Bloomington with Gyorgy Pauk and Josef Gingold. In addition, masterclasses with Andras Schiff, Menahem Pressler and members of the Amadeus String Quartet at Prussia Cove and the Banff Centre for the Arts were a source of great inspiration in the early days. She enjoys all aspects of the repertoire, from sonatas with Benjamin Frith and Leon McCawley, clarinet trios with Robert Plane, to horn trios with David Pyatt, Richard Watkins and Alec Frank-Gemmill. Her experience has led to invitations to appear on international juries.

Lucy is a regular guest leader of many UK orchestras and holds the position of principal 2nd violin with the Chamber Orchestra of Europe. As part of the COE Academy she often gives lessons and advice to up and coming violinists and has directed student performances of Mozart, Beethoven and Brahms Symphonies. She lives in Cardiff and teaches at the Royal Welsh College of Music and Drama.

Violist Rosalind Ventris leads an international career as a soloist and chamber musician. 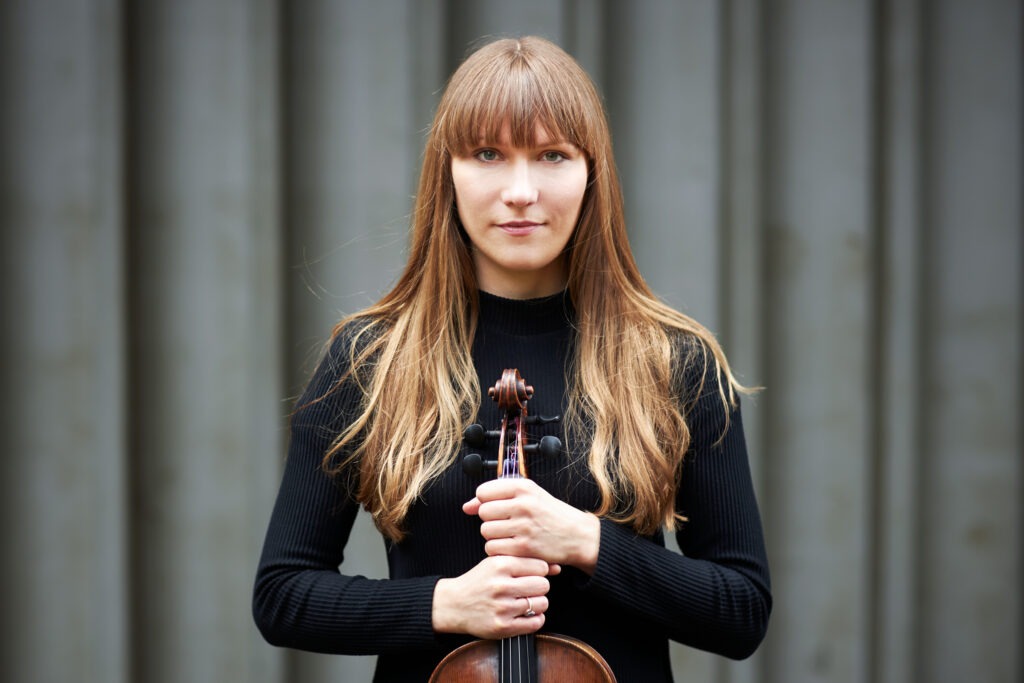 As a chamber musician, Rosalind frequently performs as part of the Kaleidoscope Chamber Collective (Associate Ensemble of the Wigmore Hall), and is the violist of flute, viola and harp ensemble Trio Anima. She has collaborated with internationally renowned artists such as Mitsuko Uchida, Tabea Zimmermann, and Nicola Benedetti. She has been invited to perform at many prestigious festivals internationally, including the West Cork, Marlboro, Salzburg and Båstad Festivals, IMS Prussia Cove Open Chamber Music, and venues such as the Auditorium du Louvre, Paris, and the Beethoven-Haus, Bonn. Praised for her ‘beguiling’ and ‘characterful’ playing (Gramophone), recordings featuring Rosalind as a chamber musician have received favourable reviews in the national and international press.

Tenor James Gilchrist began his working life as a doctor, turning to a full-time music career in 1996.

A master of English music, he has performed Britten’s Church Parables in St Petersburg, London and at the Aldeburgh Festival, Nocturne with the NHK Symphony in Tokyo and War Requiem with the San Francisco Symphony. Recent highlights have included singing the role of Rev. Adams in Britten’s Peter Grimes in Deborah Warner’s award-winning production at the Teatro Real, Madrid, and for his company debut at the Royal Opera House, Covent Garden, as well as with Bergen Philharmonic and Edward Gardner at the Edinburgh International Festival, the Royal Festival Hall, Grieghallen and Den Norske Opera.

Further highlights include Haydn’s Creation for a staged production with Garsington Opera and Ballet Rambert, Elijah with Goteborgs Symfoniker and Masaaki Suzuki, and a return to King’s College, Cambridge to perform St Matthew Passion as part of Stephen Cleobury’s final Easter week as Director of Music. Bach’s St John and St Matthew Passion feature prominently in his schedule, and he is celebrated as perhaps the finest Evangelist of his generation.

Highlights in James’ 22-23 season include his debut at the Opéra national de Paris for Deborah Warner’s acclaimed production of Peter Grimes, St John Passion with the Tafelmusik Baroque Orchestra in Toronto and recitals at Oxford Lieder Festival and Leeds Lieder. 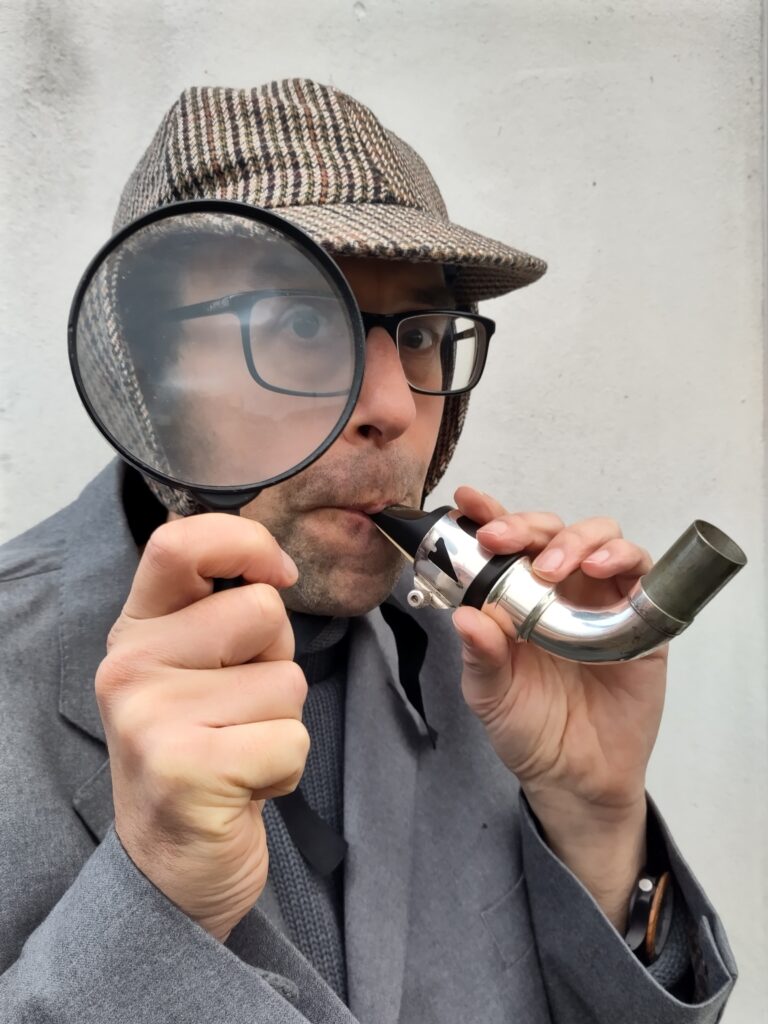 His role in BBC NOW involves regularly playing principal and second clarinet as well as Basset Horn. Before joining the BBC NOW in October 2011 Lenny worked for ten years as a freelance clarinet player and teacher based in Manchester. Having worked for over two decades as a professional musician he has performed with many of the UK’s leading orchestras and ensembles.

Lenny is an active chamber musician, and from 1999 to 2011 was a member of the Fell Clarinet Quartet with whom he performed throughout the UK and recorded two CDs. Since moving to Wales he has performed with Cardiff Winds and the Flourish Wind Quintet. 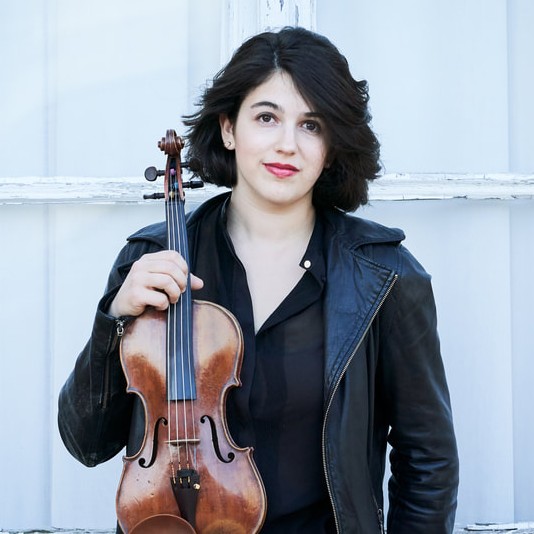 She is currently leader of Aurora Orchestra and Principal 2nd in Chamber Orchestra of Europe and Kammerakademie Potsdam.

An extremely passionate chamber musician, she is a member of Spunicunifait, a string quintet on period instruments, and has performed at festivals such as Marlboro and Lockenhaus as well as being a regular at Prussia Cove Open Chamber Music. She has had the opportunity to collaborate with musicians such as Kristian Bezuidenhout, Vilde Frang, Nobuko Imai, Steven Isserlis and Anna Prohaska, among others.

Maia was born in Japan in 1992 and is of Argentinean heritage. She studied at the Curtis Institute of Music and Hanns Eisler Hochschule für Musik in Berlin. Her teachers have included Ida Kavafian, Joseph Silverstein, Antje Weithaas and Rainer Schmidt.

Apart from music, she is a great lover of all things involving food, travelling, and spending time outside in the sun whenever it shows up (she lives in Berlin).

Since graduating from the Royal Northern College of Music in 2010, James has performed and recorded with many of Europe’s finest ensembles using both historical and modern instruments.

He has appeared as leader with Orchestra of the Age of Enlightenment, Arcangelo, Classical Opera, Academy of Ancient Music, The Taverner Players, Alison Balsom Ensemble, Solomon’s Knot, and as an ensemble leader for major pop artists including Eminem, Architects, Alter Bridge, Bring Me The Horizon, Clean Bandit, and Sting, among others.

As a chamber musician he has travelled internationally and performed at many of the world’s great festivals, including Göttingen Handel Festival, Halle Handel Festival, Leipzig Bachfest, Bachseminar Arnstadt, Edinburgh, Newbury Spring Festival, Ryedale, Spitalfields, Shanghai, Seoul, New York, West Cork, and with the Dante Quartet, Callino Quartet, and Arcangelo. More recently he performed Max Richter’s Four Seasons as part of a theatre piece at Shakespeare’s Globe to great critical acclaim, playing more than fifty performances over two months. Since 2019 he has held the post of Head of Strings at Winchester College.

James and his ever patient partner Sophie herd three children, two dogs, and a greedy cat around Hampshire. The cat is the most obedient.

Elliot was first taught violin and viola by his parents Paula and Laurence Kempton at the age of 6. 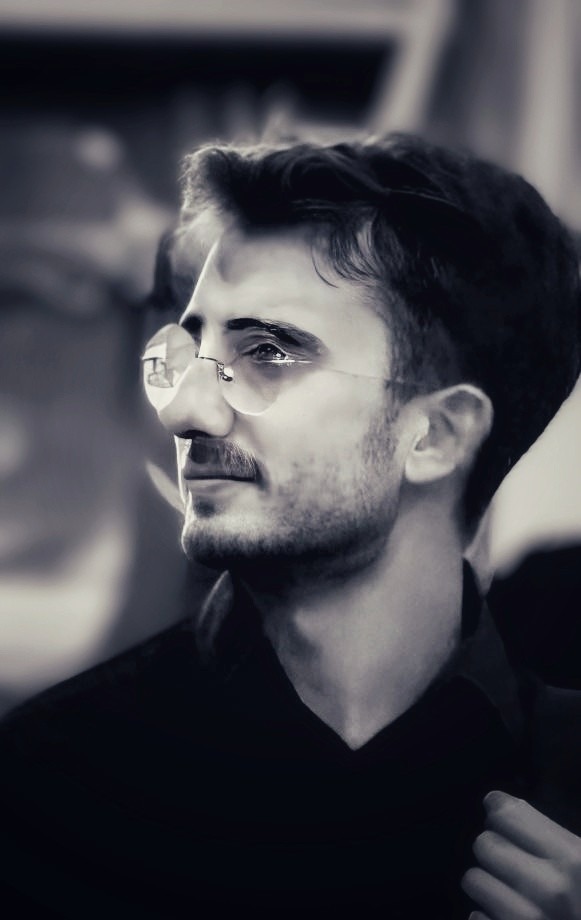 He was very fortunate to grow up in a musical family, and was taught music through playing chamber music with his parents. When he was 18, he moved to Cardiff to study with Bartosz Woroch at the Royal Welsh College of Music and Drama, as well receiving regular lessons from visiting professor Itzahk Rashkovsky.

During his time in Cardiff, Elliot co-founded ‘Quartet Draig’, and continues to play with them as their first violinist. Aside from their classical repertoire, the quartet compose and arrange Welsh folk music, as well as commissioning and performing contemporary works. He is also an active member of the Flute, Viola, Harp ensemble ‘Oneira Trio’, who perform regularly across England and Wales.

In 2022 he moved to London to pursue a postgraduate degree at the Guildhall School of Music and Drama with Matthew Jones. Alongside this, he became the Viola player of the Fibonacci Quartet, who enjoy an international career, having won numerous international competitions as well appearing multiple times on BBC radio 3. Together, the quartet study with Günter Pichler at the Escuala de Reina Sofia in Madrid, as well as recieving regular masterclasses through the Dutch String Quartet Academy (NSKA), and the “ProQuartet” organisation in Paris.

Elliot is extremely grateful for the support he has received from the Guildhall School of Music Drama, Harrison Frank Foundation, Stephen Bell Charitable Trust, Countess of Munster Trust, and Talent Unlimited.

In 2018, Tim Posner became the first British cellist to be awarded a prize at the International Karl Davidov Competition in Latvia. 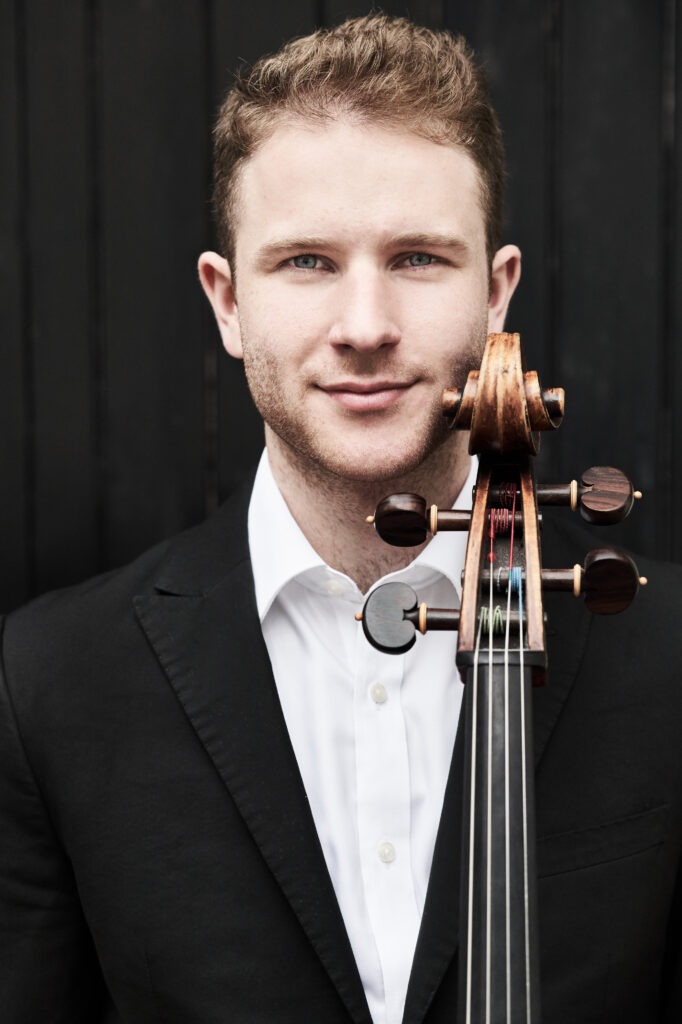 Tim has performed as soloist with orchestras including the NDR Radiophilharmonie, Royal Philharmonic Orchestra and the London Mozart Players with conductors such as Andrew Manze. Highlights of the 2022/23 season include a recording of Cipriani Potter’s Concertante with the BBC National Orchestra of Wales, the IMS Open Chamber Music tour and recitals in Het Concertgebouw and Gstaad.

In 2010 Tim founded The Teyber Trio alongside Tim Crawford and Timothy Ridout, with whom he continues to perform internationally. He has performed at chamber music festivals including the IMS Open Chamber Music, Molyvos, Kronberg, Musikdorf Ernen, Lewes, Peasmarsh and Cheltenham festivals. As a chamber musician he has collaborated with musicians such as Sir Andras Schiff, Gidon Kremer, Lars Vogt, Alasdair Beatson, Anthony Marwood and the Doric Quartet.

Born in 1995, he began playing the cello at the age of eight, studying with his mother, Julia Desbruslais. He is currently studying in the ‘Solo Class’ of Prof. Leonid Gorokhov at the Hochschule für Musik in Hanover and draws great inspiration from regular masterclasses with Steven Isserlis. 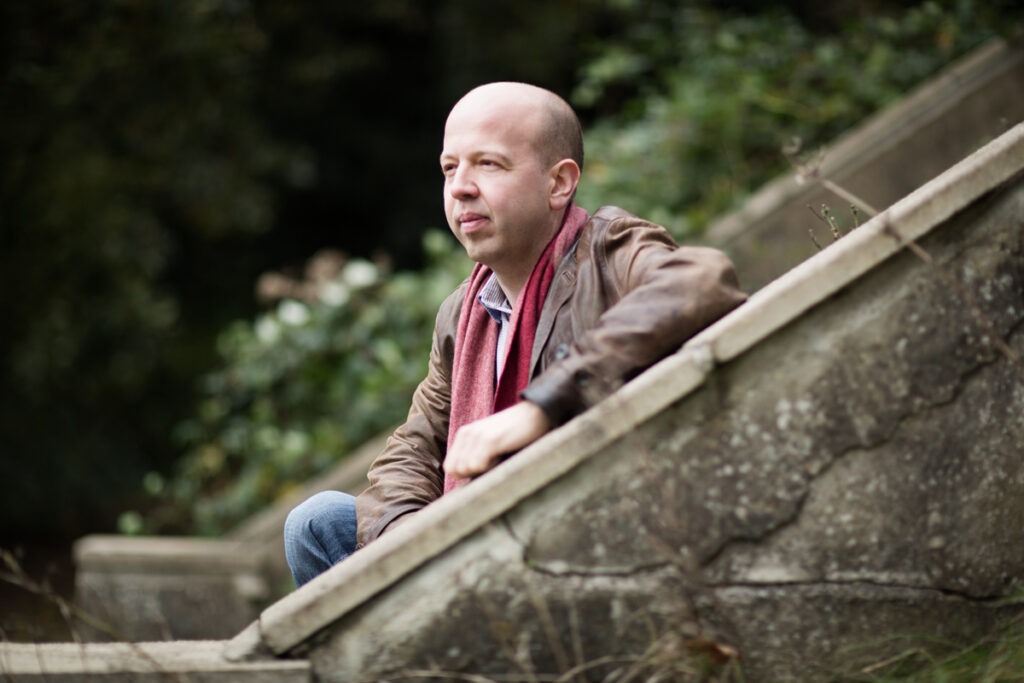 Born in 1976, in Pontypool, South Wales he studied piano with Peter Lawson at Chetham’s School of Music and composition with Robin Holloway, Alexander Goehr and Julian Anderson at Cambridge and the Royal College of Music, and now teaches composition at the Royal Academy of Music. As a pianist, Watkins has performed with leading UK orchestras, and has given recitals at top British and American venues as Wigmore Hall and the Smithsonian.

His duet and vocal partners include Alina Ibragimova, Daniel Hope and Carolyn Sampson, who recorded his Five Larkin Songs (with Joseph Middleton) in 2020. Sampson is just one of the leading British performers who have championed Watkins’ compositions; others include the London Symphony Orchestra, which premiered his London Concerto to mark its 2005 centenary. Watkins’ chorus and orchestra work The Moon premiered at the 2019 Proms in London, and his Dawning was performed in Early 2020 by the Indianapolis Symphony Orchestra. Watkins has written numerous chamber works, including string quartets and a piano quintet, his catalogue of vocal works is large, and he has composed a pair of song cycles for soprano Ruby Hughes.

Lumas Winds are a dynamic, young chamber ensemble based in London made up of recent graduates from the Royal Academy and Royal College of Music. 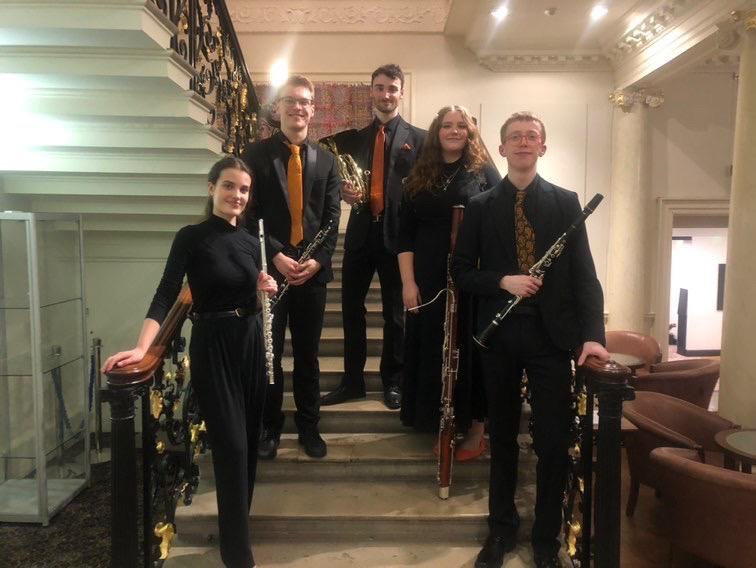 Committed ambassadors for wind chamber music and the rich variety of repertoire that it offers, the group makes a real effort to give an insight into the thinking behind their programmatic approach and background research.  Their main focus is to perform, promote and make a case for works not in the canon but deserve to be so.

In 2023 Lumas will release their debut album with the Champs Hill Records Label. A disc featuring wind quintets spanning six decades and containing world premiere recordings. The group reached the finals of the Royal Over Seas League Mixed Ensemble prize in 2022 and were ‘young artists in residence’ at the 2021 Corbridge Chamber Music Festival.