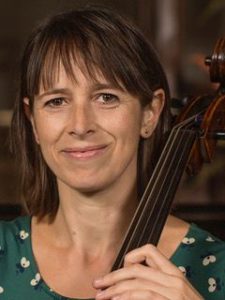 In 1990, Kate won a scholarship to the Royal Academy of Music, where she formed the celebrated Leopold String Trio. They recorded for Hyperion Records and soon became BBC New Generation Artists and ECHO ‘Rising Stars’. Kate used their Borletti‐Buitoni Trust Award to curate a series at Wigmore Hall and Turner Sims and the trio went on to win the Royal Philharmonic Society Award for Chamber Music. From 2012-2022 she turned her focus to the London Bridge Trio, most recently recording piano trios by Schumann and Mendelssohn in their ‘Leipzig Circle’ series. She has been a member of the Chamber Orchestra of Europe since 2000, working regularly with conductors Simon Rattle, Yannick Nezet Seguin and Antonio Pappano.

Kate loves teaching and presently gives classes at the Royal Academy of Music. She has coached on many summer courses, including Cadenza (London) and Citta Alta Chamber Music Week (Bergamo) and she is the cello coach of the National Youth Orchestra of Wales.